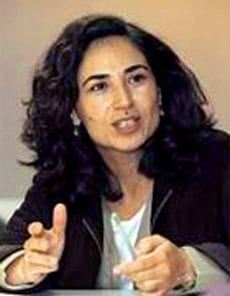 Over the years, the projects that have attracted me most have had to do with how subjectivity is mediated through and constructed with the help of language and how language in turn shapes experiences and exchanges in different spheres of daily life, in exchanges with others, and with God as an addressee through ritual and non-ritual acts.

I received my BA and PhD in linguistics from the University of Pennsylvania. My first book was on language and gender in Cairo and addressed one of the main questions emerging out of sociolinguistics in the 1980s—who are the agents of language change, women or men?

I gravitated toward linguistic anthropology after finishing my dissertation. Based on a second period of fieldwork in Cairo in 1995-96, I wrote Sacred Language, Ordinary People: Dilemmas of Culture and Politics in Egypt (2003). In this book, I explore the dilemmas that have arisen as a result of choosing Classical Arabic (the language of the Qur’an) as the official standard language of Egypt (and of other Arab countries), rather than Egyptian Arabic, the mother tongue of Egyptians. As part of the reform movement beginning in the 19th century, the choice was made to “modernize” [tahdith] Classical Arabic in order to make it more suitable for contemporary needs rather than standardize the vernacular language. A version of Classical Arabic was developed that secular intellectuals and Arab nationalists saw as the language representing their contributions to the modernization project. However, the identification of Classical Arabic with the Qur’an is very strong and it gets reinforced daily by reading and listening to the Qur’an and by doing the daily salat (namaz in Persian) prayers. I argue that Egyptian Muslims (like other Muslims) are custodians of Classical Arabic and as custodians, the question of who has the right to change the language is deeply contentious. Up to the present time, the language question is addressed in conferences in many parts of the Arab world and continues to be deeply divisive. At the same time, the use of Arabic online seems to be promoting the written use of vernacular Arabic and the younger generations appear more attracted to its use. In fact, vernacular Arabic in Egypt is in the process of being standardized and will perhaps be used more extensively in print, as has been the case with a number of novels that have appeared in the last decade.

Out of this project, I collaborated with Dr. Catherine Miller, Director of the Institut de recherches et d’etudes sur le monde arabe et musulman (IREMAM) on language and modernity in various parts of the Muslim world such as Turkey, India, Pakistan, Indonesia, Morocco, East Africa, and Cameroon, among others. This topic continues to interest me and I hope to go back to it soon.

Between 2008 and 2016, I carried out fieldwork in Tehran, Iran with a group of middle class, educated women born in the 1940s. A book based on this work was just published (though its copyright date is 2021). The book is called Say What Your Longing Heart Desires: Women,  Prayer, and Poetry in Iran (Stanford University Press). I argue that prayer and poetry have been companions in the cultural history of Iran over the past centuries; and they are so also in the lives of these women.

I received a Guggenheim Fellowship and a Stanford Humanities Center Fellowship in 2015-2016.

Notes on Ritual Prayer in Iran: Qunut Choices among a Group of Shi‘i Women. In Approaches to the Qur’an in Contemporary Iran, edited by Alessandro Cancian. Qur’anic Studies Series 18  (Oxford: Oxford University Press in Association with the Institute of Ismaili Studies, 2019).

Unbundling sincerity: Language, mediation, and interiority in comparative perspective. This is an edited collection on comparative notions of sincerity in four religious communities that appeared in the journal Hau: Journal of Ethnographic Theory. My own contribution to this section can be accessed on the journal's website. The article is called, "The sincere subject: Mediation and interiority among a group of Muslim women in Iran."

Speaking up for a Plurality of Muslim Voices. The Guardian. July 26, 2003.

Getting Lost in Translation and Quotation. The Guardian. August 30, 2003.

The Elephant in the Room: Language and Literacy in the Arab World. 2009. Cambridge Handbook of Literacy. Edited by David Olson and Nancy Torrance. Cambridge University Press.

The uses and abuses of Classical Arabic. In Transeuropeennes, Vol. 23, special issue on Religions in Politics. 2003. (French-English bilingual journal published in Paris).

Form and ideology: Arabic sociolinguistics and beyond. 2000. Annual Review of Anthropology, 29:61-87. 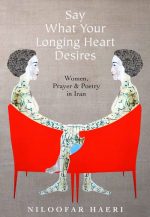 Say What Your Longing Heart Desires 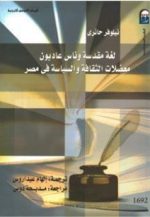 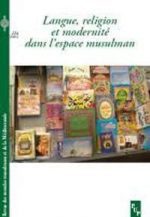 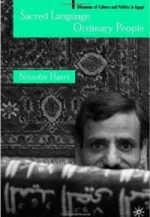 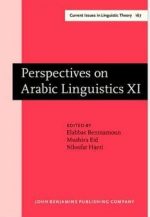 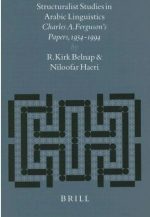 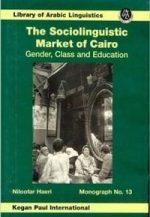 The Sociolinguistic Market of Cairo: Gender, Class, and Education (Library of Arabic Linguistics)

The project I have just begun working on is on questions of voice, presence and absence. It seems to me that translations of sacred texts produce an absence—that of the voice of the divine. What kind of theoretical framework can hear this voice? In thinking about this and similar questions, I am inspired by the work of Michel de Certeau, Walter Benjamin, Robert Orsi and Hans Ulrich Gumbrecht.

Visual Productions of the Iranian and Russian Revolutions

This is a team project that I have begun with my colleagues Prof. Narges Bajoghli of SAIS and Prof. Anne Eakin-Moss at the Department of Comparative Thought and Religion at Johns Hopkins. We received a Discovery Grant from the Provost’s office for the project “Invitation to the Masses: The Russian and Iranian Revolutions and their Arts of Persuasion.” We are interested in following threads of exchange traveling through a variety of means between Russia, Iran and also Latin America. Although the Russian revolution is viewed as the quintessential “modern” revolution and the Iranian revolution as anything but, the visual landscape of the Iranian revolution before the war with Iraq shows many traces from Russia (and countries in Latin America).

Say What Your Longing Heart Desires: Women, Prayer, and Poetry in Iran

My project on prayer and poetry was just published: Say What Your Longing Heart Desires: Women, Prayer, and Poetry in Iran (Stanford University Press). I begin this book with the question of how we can avoid looking at revolutions as either failures or successes. The 1979 revolution in Iran resulted in a mass involvement with theological questions—most notably, what kind of Islam is the true one? The Islamic Republic sought to define and impose a certain version of Islam on Iranians. Hence, it was inevitable that people would question the authority of this particular approach by the state and offer their own alternatives. I show in my book how classical poetry (much of which is mystical) is used in the public sphere to construct and argue for alternatives.

I also examine debates such as whether a namaz must have a spiritual aspect or is it merely a fulfillment of a religious requirement. What are the stakes of such debates and how are the various positions articulated. I explore the role of language in constructing a relationship with God. What is inward speech like and is it very different from the kinds of speech we use to address others around us?

I analyze the temporality of performing a ritual: Is praying at 18 the same as praying at 60? If not, what are the changes in form and content. What happens to a ritual such as the namaz when it is performed, not in public and with other people, but in private and at home, in the presence of God alone.

Sincerity is often discussed as somehow belonging exclusively to Protestantism. Through two panels organized at the AAA, we published papers on sincerity among Methodists in Papua New Guinea, in contemporary Russia, among Orthodox Jews in New York, and Shi’a women in Iran. This collection that I edited was published in the journal Hau: Journal of Ethnographic Theory.

Translation, Education, and the Production of Knowledge

Tehran boasts a surprisingly large number of bookstores—old and dusty ones as well as sleek new ones. These bookstores house copious translations of literary works, old and new, from many parts of the world. In the last few decades, self-help books that come out in the U.S. are translated almost immediately. What attracted my attention this time is the sheer volume of translations in philosophy and the social sciences from French and English.

Examining reading materials for graduate students in anthropology and sociology, one comes away with the impression that more than half of what they read are works in translation. How do translations contribute to the production of knowledge and to creativity within the local intellectual milieu? Which translations enter the curricula at universities and why? There is a category of books in Iran that are both translations and original works–they are called roughly “translated and composed” (tarjomeh va ta’lif). Often, university professors translate an author’s work and write an introduction to it themselves, adding commentary where necessary. I have begun interviewing translators of social scientific and literary works. I am also putting together a history of course materials in the last decade.

Modesty and Public Appearance Among Jews, Christians and Muslims

I have broadened this project and carried out interviews with rabbis, priests and Muslim clerics in London as well in Iran. I am now in the process of putting together the historical and contemporary materials that I have gathered. I begin this research with the overarching question of the meanings of modesty and ask a number of questions: How do aesthetics and morality intersect for different groups of Iranians and what has changed in this respect since the early 20th century? What roles have class and gender played in negotiating the relations between piety, modesty and dress? I have found the literature on the social history of moral regulation in the West and of sumptuary laws to be quite relevant to this project. There needs to be a revisiting of this period in Iranian history that pays close attention to the long term consequences of de-cloaking (suits, skirts and hats, as opposed to robes, turbans and veils), the effects of the technologies of photography and film (both of which came to Iran only a few years after Europe), the proliferation of shops and places of leisure, and the steady increases in literacy rates. Most research on hijab excludes three very important groups: men, non-Muslims, and non-believers. There are ways in which what men wear also illuminate the question of modesty. And there is no principled reason why non-Muslim views of modesty should not be researched and analyzed. In Iran, Zoroastrianism predates Islam; and Jews and Christians have been living there for a long time, the latter since the time of Cyrus (550 B.C.). How could it be that their codes, views and practices would not be relevant to Iranians’ notions of modesty?

I have written a great deal on the social, cultural and political complexities of the language situation in Egypt. Some of my discussions on Egypt are also applicable to other parts of the Arab world. In my book Sacred Language, Ordinary people, I pursue the question of what a modern language is as well as what the relationship is between a “modern” language and modernity. I follow the reasons for the historical refusal of allowing vernacular forms of Arabic to become written languages of their own, the consequences of this “decision,” and the varied implications of using Classical Arabic instead—a language which a majority of Arab Muslims (as well as other Muslims) believe to be the word of God and in this sense “sacred.” There is often an emphatic denial of the importance of the association between Classical Arabic and the Qur’an, both on the part of many secular Arab intellectuals and on the part of non-Arab scholars who dismiss such ideas without any systematic study.