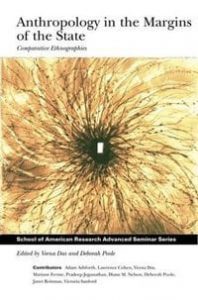 The very form and reach of the modern state are changing radically under the pressure of globalization. Featuring nine of the leading scholars in the field, this innovative exploration of these transformations develops an ethnographic methodology and theoretical apparatus to assess perceptions of power in three regions where state reform and violence have been particularly dramatic: Africa, Latin America, and South Asia. Rather than a geographic border, the term “margin” describes areas far from the centers of state sovereignty in which states are unable to ensure implementation of their programs and policies. Understanding how people perceive and experience the agency of the state; who is of, and not of, the state; and how practices at the margins shape the state itself are central themes.

Drawing on fieldwork in Sierra Leone, Sri Lanka, Peru, Guatemala, India, Chad, Colombia, and South Africa, the contributors examine official documentary practices and their forms and falsifications; the problems that highly mobile mercenaries, currency, goods, arms, and diamonds pose to the state; emerging non-state regulatory authorities; and the role language plays as cultures struggle to articulate their situation. These case studies provide wide-ranging analyses of the relationship between states and peoples on the edges of state power’s effective reign.