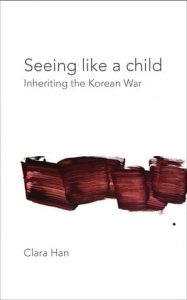 Seeing Like a Child is a deeply moving narrative that showcases an unexpected voice from an established researcher. Through an unwavering commitment to a child’s perspective, Clara Han explores how the catastrophic event of the Korean War is dispersed into domestic life. Han writes from inside her childhood memories as the daughter of parents who were displaced by war, who fled from the North to the South of Korea, and whose displacement in Korea and subsequent migration to the United States implicated the fraying and suppression of kinship relations and the Korean language. At the same time, Han writes as an anthropologist whose fieldwork has taken her to the devastated worlds of her parents―to Korea and to the Korean language―allowing her, as she explains, to find and found kinship relationships that had been suppressed or broken in war and illness. A fascinating counterpoint to the project of testimony that seeks to transmit a narrative of the event to future generations, Seeing Like a Child sees the inheritance of familial memories of violence as embedded in how the child inhabits her everyday life.